The Film Agency managed the film social media campaign of Toni Erdmann at the Cannes Film Festival launch for The Match Factory. There is no doubt that Toni Erdmann has been The big buzz during Cannes 2016, and this has been reflected on social media, generating lots of comments and huge engagement that the film can capitalize in the future. The Facebook campaign has been focused in promoting good reviews, articles, interviews and exclusives on media, and pictures from the premiere, red carpet, photocall and other special activities around the Festival. Apart from all the general activity, on Twitter we have managed the conversation about the film, tracking all the comments and pushing the good ones. The growth of this social network was particularly dramatic on the day of the awards where the Internet community expressed loud and clear their disappointment with the jury’s choices. It is worth stressing the good results of the Kukeri Video, which was shared on exclusive with Variety, where it reach 5,8k views organically. We also promoted the video via Facebook Native Video where it reached 50k views. We coordinated the social media action with the German and French distributors generating a Global Page and adhoc ads and contents. All the other distributors of the film can join this Global Page.

Maren Ade's unique study of an estranged but mutually depressive father and daughter is a humane, hilarious triumph. 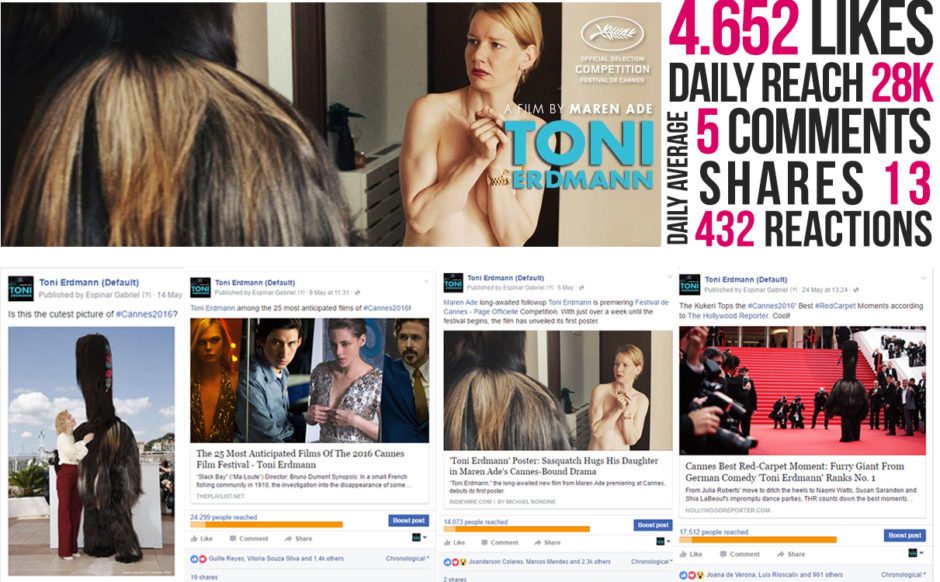